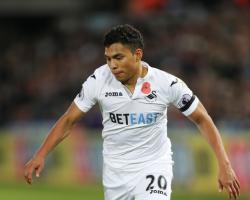 Montero fractured a bone in his left hand in a fall during last Sunday's 3-1 Premier League home defeat to Manchester United.

The 27-year-old returned from international duty with Ecuador following x-ray confirmation of the break.

It was feared that Montero would be forced to undergo surgery and be absent for some time.

But a statement on the official Swansea website said: "Having seen a specialist yesterday, he (Montero) was given the go ahead to continue training and playing in a cast."

Montero had only just returned from a calf injury to appear as a substitute against United, and his return is a boost for new Swansea manager Bob Bradley.

Swansea are one place off the bottom of the table having failed to win since the opening day of the season and have lost three of Bradley's four games in charge.