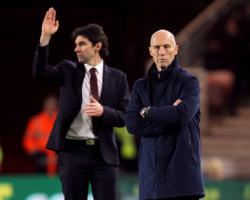 Two Alvaro Negredo goals and a third from Marten de Roon sent the Swans second bottom of the Premier League table and left some among the small army of travelling supporters calling for the American's head.

Bradley has struggled to get the best out of his players in his 17 games in charge and they failed to respond to his call for more resilience in the wake of Wednesday night's equally painful 3-1 defeat at West Brom.

Now Bradley will look to strengthen his side "in all areas" in the January transfer window - but only after back-to-back home games against West Ham and Bournemouth which he believes can help his side start 2017 in good heart.

Bradley said: "We've talked about the possibility of improving in all areas in January and that hasn't changed, but the matches between now and January - two homes games against West Ham and Bournemouth - are important.

That's going to be important and of course now we'll look at our next two matches because winning home matches in this battle is going to be the real key."

Swansea started with surprising urgency against a Boro side still reeling from their midweek mauling by Liverpool, with Modou Barrow missing an early opportunity and Gylfi Sigurdsson bringing a save out of Victor Valdes.

But Boro shrugged off the early loss of Viktor Fischer with a knee injury and clawed their way back into the game, Negredo bringing a save out of Lukasz Fabianski before he opened the scoring in the 18th minute with a fine curling shot after a cross from Adam Clayton.

Boro were still not entirely convincing despite the returning Gaston Ramirez - a major influence on his side - almost making it 2-0 when he fired a free-kick just over the bar after being fouled by Angel Rangel in a dangerous position.

It was perhaps no coincidence that Boro lost the two games that Ramirez missed with a foot injury, and boss Aitor Karanka admitted: "Gaston has made a big difference since he arrived here last season

"When he is not on the pitch the team can't feel him, but I didn't want to use that as an excuse after the last two games because we win and lose as a team."

Negredo scored his second from the penalty spot just before the half hour after Jordi Amat clipped Adam Forshaw in the box, and de Roon polished off the simplest of chances from a Ramirez cross on 58 minutes.

And it spoke volumes for the paucity of Swansea's threat that Boro boss Karanka should pronounce himself dissatisfied with his team's performance despite a convincing win that leaves them clear of the relegation quagmire.

Karanka praised the resurgent Negredo, who has swatted some early criticism since scoring two goals in the 2-2 draw at Leicester at the end of last month.

Karanka said: He (Negredo) needs to have those chances to score

He scored against Leicester and has had chances in other games but he knows adding goals is very important for his confidence.

"But for the other players on the pitch, even when he is not scoring goals they feel that he is contributing to the team."