Leon Britton feels Swansea have the character for relegation scrap 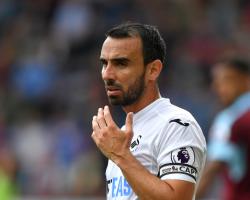 Swansea started the game in 20th place and many questioned whether Bob Bradley's side had the stomach for a fight after conceding nine goals in two games.

"We've got the character and spirit in the team," club captain Britton said after making his first appearance for over a month following injury.

"People associate Swansea with great football, but over the years we've shown we can dog out results as well.

"Sometimes it's not going to be pretty, but it's what you've got to do in this league to pick up points.

You've just got to look at the Palace game (when Swansea scored twice in added time to win 5-4).

"We've got strong characters in the changing room, lads with experience, and we need to use that to make sure we stay out of the bottom three."

Manager Bradley had spent all week in the spotlight after Swansea capitulated at Tottenham to lose 5-0.

The American was installed as favourite to be the next Premier League manager fired despite only being appointed at the start of October.

"There's been pressure on the manager from the outside, but I've seen no change in him," Britton said ahead of trips to West Brom and Middlesbrough this week.

That's why we're delighted for him.

"It's been tough since he's come in, he had won one in seven and there was a bit of pressure on him.

"But we need to build on this

The games coming up are winnable and we need to make sure we turn those games into points.

"We need to perform like we did here and if we do, over the next period, then I'm sure we'll pick up enough points to get us up the table."

Sunderland had beaten Bournemouth, Hull and Leicester since the start of November as David Moyes seemingly put his stamp on the Black Cats after an awful start.

But Sunderland managed only two shots on target and folded quickly after Jason Denayer handled for Sigurdsson to open the scoring with a 51st-minute penalty.

"We're disappointed in the way we lost the game," defender Billy Jones said

"We talked before the game about the standards we had set in winning three of our last four games and hitting that same level of consistency.

"But once they scored that first goal we never got back into.

"We knew it was a massive game and we were hoping to create some daylight between ourselves and the teams down there.

"It wasn't to be, but nothing's changed

December is still a massive month for us and a lot of the lads have the experience of what you need to get out of trouble."