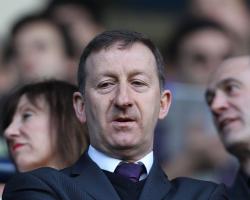 The Welsh club, who are currently sixth in the Barclays Premier League, are understood to have opened talks about possible overseas investment

Press Association Sport understands Swansea have spoken to American businessman John Jay Moores, the former owner of the San Diego Padres Major League Baseball franchise, about future investment which could see the 70-year-old taking a stake in the club as well as opening up commercial revenue streams in the United States.

Swansea chairman Huw Jenkins, writing in Sunday's edition of the club's matchday programme 'Jack Magazine' for the visit of Arsenal, has spoken about the issue for the first time and, while addressing fundamental issues the board see as necessary to take the club forward, has said there is no guarantee that any investment will be approved.

"There has been a lot of talk recently about potential new investment coming into the club," Jenkins said in an extract from the article published on the club's official website.

"This needs to be considered in more detail before any of our supporters can decide if the thought of a new person or people sitting on our current Board of Directors to offer help and opinions on the future running of our football club is a good move or not.

"Whatever happens in the future, there are a number of clear questions that need to be asked:

Will the current Board of Directors continue as they are forever?

Can Swansea City operate in the same way for the next 10 years or so as it has in the past?

Will standing still and protecting what we already have be enough for us to compete in the future?

"Although I cannot promise or predict the future, I can guarantee one thing - the current Board of Directors will always fight, as we have done over the last 12 years, to work together as one with the Supporters Trust to make 100 per cent sure that Swansea City Football Club remains the number one priority in all our thoughts and in every decision we make."

Swansea are the only Premier League club who have a supporter on the Board and the Supporters' Trust owns more than 21 per cent of a club which a decade ago had to fight liquidation and was almost relegated from the Football League on the final day of the season.

The Supporters' Trust have told the club they will not back a buy-out of shares and urged shareholders not to sell to American investors.