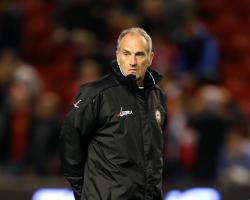 Press Association Sport understands the 60-year-old Italian will be named as the club's new head coach working alongside Alan Curtis, who was only confirmed in the role 10 days ago.

Guidolin - who will sign an initial short-term contract - will watch from the stands before taking charge for the first time in next Sunday's top-flight trip to Everton.

Although the deal is yet to be officially confirmed, club chiefs decided to act after just one win in six games under Curtis saw the club slide back into the relegation zone on Saturday.

Swansea will become the 14th different club in Guidolin's managerial career, which peaked during a recent spell at Udinese, whom he twice led into the Champions League

He started out in charge of minor club Giorgione, and has also had spells at Atalanta, Bologna, Genoa and Palermo.

Guidolin's only experience of managing outside Italy came in 2005, when he had a short spell in charge of Monaco.

Since leaving Udinese last year, Guidolin worked as a technical adviser to the Pozzo family, which has a controlling stake in Udinese, Granada and Watford.

Earlier, Curtis had appeared to intimate that his short spell in sole charge of the club could be drawing to a close

Curtis said: "I'd expect to be here until the end of the season, but if results go against us and the club deem it that they need to bring someone in at short notice, then so be it."