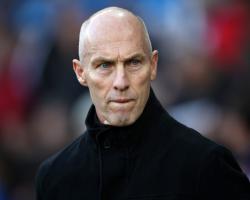 Kane has had his season disrupted by a seven-week lay-off with an ankle problem, but the England star has been boosted ahead of Swansea's Premier League visit by signing a new Spurs deal which will run until 2022.

That could spell bad news for a Swansea side who have been vulnerable at the back all season and whose defensive frailties were again exposed in the astonishing 5-4 victory over Crystal Palace last weekend.

"Harry Kane is a terrific finisher and you need real concentration right through the match against him," Bradley said.

"You give him a chance and he has a solid record of hitting the target and scoring different kinds of goals.

So it is mainly a test of awareness and concentration."

Swansea managed the first win of the Bradley era in extraordinary circumstances against Palace to climb off the bottom of the table at Sunderland's expense.

Only Hull have conceded more in the top flight and set-pieces are of particular concern, with Swansea's long-standing fallibility continuing under Bradley.

"We've given up four goals from corners in my six games and that's not a good record," Bradley said.

"When you look deeper at a crazy match - which the Palace game was - set-pieces have a lot to do with it.

"Yes, it was a game where we had defensive issues, but it was a prime example of a game where set-pieces on both sides totally threw the game into a tailspin.

"We have to make more defensive plays, and that includes set-pieces and the second phase, and that is something we have been working on to re-establish confidence.

"We have not been able to follow through on our clean sheet against Watford, but we need that mentality of being hard to play against to become a more complete team."

Bradley will not be encouraged by Swansea's appalling record against Spurs which has seen them fail to beat the Londoners in 10 Premier League encounters.

Swansea have lost eight of those games and not managed a league victory over Spurs since a 2-0 success at the Vetch Field in October 1982.

"I've heard about the record and I've gone back and watched some of last year's match there," Bradley said.

"When you play them you have to do a lot of things really well because they are going to press and make it difficult for you to find a passing rhythm.

"They've got interesting ways to open up space, they push their outside backs very high and bring players like Christian Eriksen inside

There is space behind them if you can move the ball quickly in those situations."