Bob Bradley rejects claims that struggling Swansea are in crisis 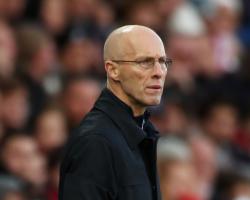 The Swans are only above bottom-placed Sunderland on goal difference after failing to win a Premier League game since the opening day.

"I cannot lead the team by myself, but I will try to work with team-mates to overcome this crisis," the experienced Ki was quoted as saying following the 2-1 World Cup qualifying victory over Uzbekistan

Bradley, who is still searching for his first win after taking over the managerial reins last month, dismissed talk of crisis ahead of Saturday's league visit to Everton.

But the former United States manager accepts that Swansea have to improve quickly to climb out of trouble.

"It is 11 (league) games, for me four," said Bradley, who has taken only one point so far during his time at the Liberty Stadium.

"We certainly understand we are in an important stretch, we need results and a confidence boost

So we are not glossing over anything that is for sure.

"But I would not say crisis

I just think we have to be strong, we have to understand that it's not just about one part of football.

"We have got to be better in many ways

For me right now it's about the recognition of key moments and making plays that matter.

"I've used the word 'intensity', and I still look at us at times and feel like we can be in a good position.

"But then when those moments arise I'm not always sure we recognise them and we have the kind of strong reaction and intensity that we need."

Ki admitted Swansea were "feeling much pressure" as they attempt to bridge the six-point gap between themselves and West Ham in 17th position.

And Ki said Bradley is "trying to figure out the team and players" after succeeding the sacked Francesco Guidolin at the start of October.

"I understand supporters feeling their passion, their emotion, their disappointment with where we stand at the moment," Bradley said.

"That part I absolutely get

But then I have to have an ability with the players when they show up every day to basically challenge them.

"I challenge them to understand that you don't get out of these tough spots in football if you don't have enough real guys.

"These guys have to say 'okay, we have put ourselves in this bad spot and now this is not going to be the end of us'.

"Would I rather that Ki or anybody speaks in a strong way at this time and says 'we're committed, we understand the spot we created, a bad situation for ourselves, and we are going to change it around?'

"Yes, I would rather them speak that way, but you get a player in a different moment

"My job is to look them in the eye every day and figure out the right message and right training and how we are going to fight our way out of that situation."