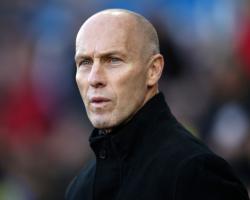 Bradley has only been at Swansea for 66 days since succeeding Francesco Guidolin, but bookmakers installed him as favourite to be the next Premier League manager fired after last weekend's 5-0 thrashing at Tottenham.

That defeat left Swansea bottom of the table with Bradley winning only one of his seven games in command - the crazy 5-4 affair against Crystal Palace on November 26.

Asked about his own future, Bradley replied: "I don't spend any time thinking about it, when you are a manager it goes with the territory

"I once told my wife I had a meeting and she said 'will you still have a job after it?' I said 'who knows?'

"At any moment guys might want to make a change, but if you try and cover yourself in those ways players will spit it out so fast and see through it

Getting to the training ground early and sizing up players as they come in in the morning.

"What's their mentality? Is the body language good? Are they saying 'count me in' or are a few looking like it is wearing on them.

"I think we are more category A than B on that, and if I am telling players look adversity in the eye and have courage then I have got to have it too."

But Bradley insists it has been business as usual at the Liberty Stadium this week and that he expects Swansea's new American owners, Steve Kaplan and Jason Levien, to back the club in the transfer market next month.

"I have every confidence Steve and Jason are ready to make moves to help us," Bradley said.

When they got involved, they knew what they were getting into.

"They understand the work that needs to be done, there is a good feeling that we are all in this together.

"As much as we are in the spot we don't want to be in, we need to pull together and work our way out of it."

But Bradley suggested there was some work to do on recruitment ahead of the transfer window.

"At this point these are not discussions that have got very far," Bradley said.

"It doesn't mean they are not possible, but those names did not come from inside our club.

"There are a lot of people talking and keeping cards close to your chest is a good strategy.

But I have confidence if we come up with the right player and he wants to come to Swansea for the challenge, then I am sure we will get him."