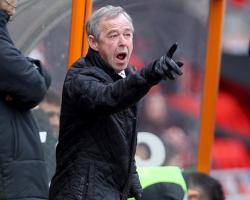 The 61-year-old developed a reputation as a star-spotter when he was in charge of Wales' youth sides between 2004 and 2012 - helping to produce the likes of Gareth Bale, Aaron Ramsey and Joe Allen - and Bradley believes Flynn's knowledge will serve Swansea well as they attempt to avoid relegation from the Premier League.

"Brian played a real important role here with some of the real success that has taken place," Swansea boss Bradley said after Flynn's appointment was announced on Thursday.

"His eye for talent has paid off in the past

So when we talk about recruitment, it starts with people who can spot talent.

"Brian's track record in that regard at Swansea is special, as is his experience as a manager.

"So I'm looking forward to working with him, but i t is fantastic for all of us to have a football man like that as we try to move things forward."

Flynn, who has managed at Wrexham and Doncaster, will work under Swansea head of recruitment David Leadbeater as he seeks to make an immediate impact at a club he left in 2004.

Swansea are currently one place off the bottom of the Premier League table and Bradley admits discussions are on-going over potential January recruits.

"That's why Brian is on board," Bradley said

"He has a role to play ahead of January when we are putting a list together for certain positions.

"You need people who can bring up a lot of different names.

"When you get to the back end of that process sometimes you are prioritising the opinion of people who have experience and that real eye for talent.

"That makes the discussions better and gives us the best chance possible of finding the right players to improve.

"We have identified some players and we are trying to identify more.

"There's been some positive discussions going on, but we would not want to make it the end of the process

We want to use January in a good way."

Swansea head to Tottenham on Saturday buoyed by the first victory of Bradley's reign, the incredible 5-4 home success over Crystal Palace last weekend.

The win, which was the Swans' first in the league since the opening day of the season, lifted the Welsh club above Sunderland and within two points of safety.

"The result was a positive reinforcement of the way we have been working, but it does not change the fact we have a lot more to do," Bradley said.

"I am aware of the table but don't look at it too often.

"I try to work and see if we can be a better, more consistent team.

"That is our focus, our mentality ahead of what will be an important stretch for us."