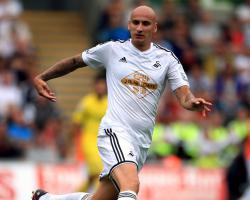 Swansea 1-1 Sunderland: Match Report - view commentary, squad, and statistics of the game as it happened.Ki secures draw for SwanseaKi Sung-yueng marked his return from the Asian Cup in Australia by salvaging Swansea a point in a 1-1 draw against his old club Sunderland.The South Korean had been away for five weeks and he struck with a diving header halfway through the second period after having an earlier effort disallowed.Jermain Defoe's regal finish before the watching Prince Albert of Monaco had threatened to give Sunderland all three Barclays Premier League points.Sunderland had built rare momentum after their first back-to-back wins of the season, following up their league victory over Burnley with a midweek FA Cup victory at Fulham.And the Black Cats settled well, even if Bafetimbi Gomis had the first shot of the contest from 25 yards which just flew wide of Costel Pantilimon's goal.Anthony Reveillere cut in between Neil Taylor and Nathan Dyer and crossed for former Swansea favourite Jordi Gomez to drive wide.Swansea slowly got their passing game together but Jonjo Shelvey and Dyer both failed to hit the target under pressure before the Sunderland defence was opened up by the slickest attack of the half.Taylor and Dyer were both heavily involved before Shelvey played the ball into the danger area

Modou Barrow could not collect but the ball ran free to Gomis and he was denied by a brave stop from Pantilimon, who threw himself at the feet of the Frenchman.Swansea thought they had taken a lead four minutes before half-time when Shelvey swung in a free-kick and Ki slotted home, but it was ruled out by a flagging assistant with television replays showing that it was incredibly tight.Swansea seemed to be still thinking about that close call when Sunderland broke moments later as Liam Bridcutt found Defoe just inside enemy territory.Defoe was allowed to advance and he slipped outside Federico Fernandez and unleashed a 20-yard shot past the helpless Lukasz Fabianski - his second goal in as many league games after being on the scoresheet against Burnley.It was poor defending from Swansea's perspective but further evidence that former England striker Defoe still possesses the touch of a master marksman after his MLS sojourn in Toronto.Sunderland claimed a penalty at the start of the second half when Ricky Alavarez tumbled over Ashley Williams' outstretched leg but referee Phil Dowd was not interested, and Fernandez wasted a decent chance for Swansea when he lashed over a bouncing ball in a crowded penalty area.Swansea were probing and starting to build up a head of steam but Williams had to react smartly to stop Danny Graham - starting his first game for Sunderland since May 2013 - profiting from Gomez's cross to the near post and that intervention proved crucial after 66 minutes.Kyle Naughton sent in a superb cross from the right and Ki ensured he would not be denied a second time with a firm diving header, with the Sunderland defence failing to mark for once.Shelvey went close with a 25-yard free-kick and Pantilimon pushed aside substitute Nelson Oliveira's late effort but but Sunderland held firm to collect a point they probably deserved