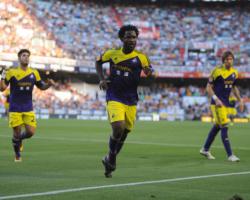 Swans raise game on Monk's big dayGarry Monk's audition to become Swansea's next manager got off to the perfect start with a handsome 3-0 victory over local rivals Cardiff in a frenetic south Wales derby.Monk, installed as head coach following Michael Laudrup's dismissal, watched Wayne Routledge give his side the lead just after the break before Nathan Dyer and Wilfried Bony secured the bragging rights late on.Kenwyne Jones missed two excellent first-half chances while the superb Craig Bellamy rattled the crossbar for the visitors.It may take time for the role to become a good fit for Monk, who, understandably, did not always look comfortable with the attention focused on him and regularly sought consul from the likes of Alan Curtis and Pep Clotet in the dug-out.But he will not care one jot after claiming such a valuable three points which moved the club he has served for a decade four points clear of the relegation zone and into the top half of the Premier League table.Cardiff, who missed the chance to record the first league double in this fixture, have now lost four of the five league games Ole Gunnar Solskjaer has taken charge of and they remain 19th, three points adrift of safety and with an inferior goal difference to all the sides above them.Monk had demanded pride and passion from his players at the end of a tumultuous week, and there was no shortage in a frantic opening as the hosts pinned the Bluebirds back with the old guard of Ashley Williams and Leon Britton setting the tone.After just 44 seconds David Marshall was forced into action when Marvin Emnes, making a first appearance since his loan move from Middlesbrough, beat Ben Turner and broke forward to free Routledge, whose tame shot was easy for the Cardiff keeper.Two minutes later Marshall made a superb challenge on Bony as Routledge's reverse pass picked out the bustling striker, the keeper pushing the ball clear as the Ivorian tried to round him.As the tempo eased, so Cardiff began to settle and Jones should have given them the lead in the 14th minute

Bellamy dug out an excellent cross from the byline but the Trinidadian headed wastefully wide.A better chance arrived soon after

Peter Whittingham controlled a poor clearance and burst towards Michel Vorm's goal, only to slip at the crucial moment.Bellamy was at the heart of everything good in Cardiff's play and another surging run picked Swansea apart, but again Jones could not profit from the veteran's good work, prodding wide.Vorm saved a dipping Whittingham volley as, while being penned back, the visitors had the sights of goal.A frantic first half, enlivened by an uncompromising tussle between Jones and Williams, ended goalless but the second was under way for barely a minute before the opener arrived.Pablo Hernandez, on for Emnes at the interval, threaded a pass beyond a dozing Fabio for Routledge to race into the box and beat Marshall for his first league goal of the season.Cardiff's response was instant, with Bellamy clattering the crossbar after coming in from the left and unleashing a powerful drive, while Kim Bo-kyung had a penalty appeal turned away as he went to ground under Ben Davies' challenge.Dyer's dribble ended with the winger bending an effort narrowly wide as the contest opened up.Cardiff should have been level with 12 minutes left

Bellamy's free-kick struck Ben Turner and fell to Kim, but the Korean hooked his volley over the bar.The miss proved costly as Swansea killed the game off.Routledge and Hernandez led a breakout, with the former's cross dropping perfectly for Dyer to head low into the corner of the net.And Bony capped off the win by powering a header into the roof of the net from Hernandez's corner to claim his 17th goal of the season, allowing Monk to savour the delight of the home support at the final whistle