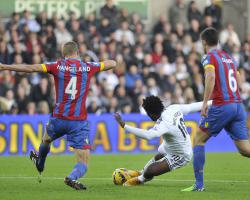 Swansea 2-0 QPR: Match Report - view commentary, squad, and statistics of the game as it happened.Ki unlocks Rangers' defenceSwansea moved into the top six of the Barclays Premier League after Ki Sung-yueng finally unlocked QPR's defence to win 2-0 at the Liberty Stadium.Rangers defended resiliently for 78 minutes before Swansea's top goalscorer Wilfried Bony turned provider and set up the South Korean midfielder for his first Liberty goal, a sweet strike past the previously unbeatable Rob Green

But Ki's angled drive off Green's far post and Routledge's third goal of the season added to Rangers' travel sickness which has failed to see them acquire an away point since their promotion.Rangers had conceded nine goals in their previous two games against Swansea and they might have feared another beating after Niko Krancjar had failed to keep his inviting first-minute free-kick down

Rangers were almost the architects of their own downfall again when Karl Henry lost possession for Montero to cross and Routledge to volley, Yun Suk-young bravely blocking the goalbound effort

Green dived to his left to keep the shot out with television replays showing how close the ball was to crossing the line, only fractions preventing Swansea from taking the lead

But having dominated the first half there was almost a nasty sting in the tail for Swansea when Krancjar crossed for Leroy Fer to steal into the box, but his header was sent straight at Lukasz Fabianski on his goal-line

The first-half pattern of Swansea creating chances but failing to take them continued within three minutes of the restart when Sigurdsson slipped Bony through, but Dunne raced back to block and the ball ended up on the roof of the Rangers' net

Rangers were relieved when Green flapped at Montero's cross and no Swansea player gambled in the six-yard box, Yun allowed to scramble the ball to safety

Swansea were really pushing forward now and Bony should have scored when Leon Britton and Routledge combined, but his finish was weak and straight at Green

Rangers got some brief respite when Fer found some space in a crowded penalty area but Bony, of all people, was back in his own six-yard box to deflect the shot over bar.But their resolute defending was to count for nothing as Swansea finally broke through in the final 12 minutes and Bony was close to adding a third in stoppage time when he struck a post