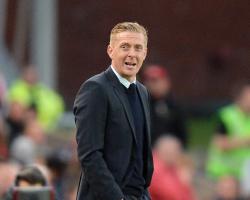 Swansea 2-0 Leicester: Match Report - view commentary, squad, and statistics of the game as it happened.Bony brace seals Swans winWilfried Bony scored both goals as Swansea saw off Leicester 2-0 at the Liberty Stadium on Saturday evening.Bony managed 16 goals in his first season in English football but endured a slow start this time around following a summer where he played for Ivory Coast at the World Cup and had to put up with constant speculation over his future.But the 25-year-old has been back to his best in recent weeks and he ensured Leicester would get nothing from their visit to south Wales by making it four goals in three games with one in each half against the shot-shy Foxes.Bony's second made him the joint highest Swansea scorer in Barclays Premier League history, equalling Michu's 20-goal total, and each time Gylfi Sigurdsson pulled the strings as Garry Monk's men ended a run of five games without a win to climb into the top six.It was a different story for a Leicester side who showed little invention in attack and have not tasted victory since that remarkable 5-3 win over Manchester United over a month ago.Swansea handed a first league start to Jefferson Montero since his B#4million summer switch from Mexican club Monarcas Morelia and the Ecuador winger saw plenty of the ball as he attacked Foxes full-back Ritchie De Laet at every opportunity.De Laet just about held his own but Montero threatened danger every time he was allowed space and Leicester often doubled up to prevent him providing an effective supply line to Bony.Leicester lined up in attacking fashion with Jamie Vardy and David Nugent among four changes from the side beaten at Newcastle, but they were unable to offer Leonardo Ulloa swift support as Swansea called the tune in a first half they completely dominated.Poor marking from a corner allowed Bony an early sight of goal but the Ivorian headed wide and then his 18-yard shot from Sigurdsson's square pass was comfortably held by Kasper Schmeichel in the Leicester goal.Schmeichel was not so composed when Wes Morgan played a back-pass into his path and the goalkeeper scuffed his clearance

Sigurdsson seemed sure to open the scoring but Morgan recovered well in time and just made contact with the ball to spare Schmeichel's blushes.Leicester were lifeless as a first-half attacking force - their best move ending with a Riyad Mahrez cross floating harmlessly wide beyond the far post - and they fell behind after being cut open in the 34th minute.Angel Rangel's pass found Bony and his delicious flick freed Sigurdsson, the Icelandic international shaping to shoot but instead cutting the ball back to Bony who finished with aplomb from 20 yards.The goal was further evidence of the growing understanding between the pair, Bony on target again after hitting his straps in the last month and Sigurdsson's seventh assist of an extremely productive campaign.Leicester needed to show some intent and they struck the crossbar within two minutes of the restart in bizarre circumstances when Liam Moore hurled his throw deep into the Swansea box.Jonjo Shelvey swung a leg at it but it was unclear whether the midfielder made any contact with it or the ball simply spun off the turf to hit the top of the Swansea crossbar.Still, Leicester were buoyed by that moment and Mahrez soon broke forward to deliver the Foxes' first shot, which sailed harmlessly over, before Danny Drinkwater forced Lukasz Fabianski to hold onto his 25-yard drive.But the wind was taken right out of Leicester sails in the 57th minute when Montero and Sigurdsson interchanged cleverly for the winger to breach the Foxes' back-line, draw Schmeichel, and leave Bony with a straightforward finish.The impressive Sigurdsson limped off straight away to be replaced by Tom Carroll but Shelvey almost put the issue beyond doubt when his 30-yard shot whistled past Schmeichel and clattered off the Leicester bar.Mahrez had been Leicester's best player by some distance, certainly from an offensive standpoint, and his 20-yarder flew close to Fabianski's far post with the goalkeeper struggling to get across his line.Leicester should have grabbed a consolation in stoppage-time when Fabianski pushed out Andy King's header and Esteban Cambiasso put the rebound against the post when it seemed easier to score, the miss from two yards out summing up the Foxes' misery