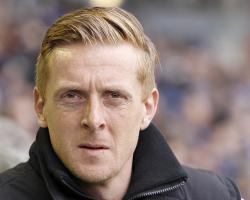 Swansea 0-1 Southampton: Match Report - view commentary, squad, and statistics of the game as it happened.Lambert snatches win for SaintsEngland striker Rickie Lambert grabbed a dramatic late winner for Southampton after an otherwise uninspiring Barclays Premier League encounter against Swansea.Lambert pounced in the third minute of stoppage time to secure an unlikely 1-0 victory.Swansea skipper Ashley Williams' attempted clearance looped high over home goalkeeper Michel Vorm, and the ball went in off substitute Lambert's back to give Southampton all three points.It looked as though the teams would play out an uninspiring 0-0 draw in the Liberty Stadium sunshine after 90 minutes that had end-of-season stamped all over it.Both teams lacked the finishing power to threaten collecting a victory, and it proved a hugely-disappointing Premier League clash.With neither Swansea nor Southampton troubled by matters at the top or bottom of the table, it was a contest that drifted along with no obvious urgency, and Lambert's goal provided an ending the match scarcely deserved.Despite the defeat, it is likely that Swansea head coach Garry Monk will be upgraded as Michael Laudrup's permanent managerial successor during the next few days.Monk has achieved the primary aim of masterminding Swansea's top-flight status for another season, and after the club's directors met on Friday, it would appear they have been suitably impressed to let him take the Swans forward.There would be no victory for Monk, though, against his former club and Southampton had the best moments of quality on show.England World Cup hopeful Luke Shaw oozed positivity throughout and Swansea's defence had to track him closely

Yet it when it came to the attacking red zone, both sides' finishing left a lot to be desired, with even Lambert's winner having a huge element of luck about it.Lambert did not make Southampton's starting line-up after being troubled by a buttock muscle problem, but he was among the substitutes as fit-again Morgan Schneiderlin started.Monk made a solitary change following last Saturday's 4-1 win against Aston Villa for the appointment with his former club, as Dutch international Dwight Tiendalli replaced groin injury victim Angel Rangel, while a minor toe problem dashed Chico Flores' hopes of returning from suspension.Swansea went closest to scoring during a bright opening as Pablo Hernandez's shot was well saved by Artur Boruc, before Wilfried Bony glanced a header narrowly wide.Southampton soon settled into their impressive passing rhythm, though, with Steven Davis prominent, and Schneiderlin should have done better than send a close-range header high over the Swansea bar.The Saints continued to dominate possession and territory, but apart from a Dejan Lovren free-kick that dipped over, clear-cut attacking opportunities remained few and far between.Sam Gallagher wasted Southampton's best chance when his 33rd-minute header failed to find the target, and that sparked a break-out for Swansea that saw the dangerous Bony go close.Southampton continued to press as half-time approached, but Swansea coped with the growing Shaw-inspired threat as a poor opening 45 minutes ended goalless.Saints skipper Adam Lallana tested Swansea keeper Michel Vorm with an angled shot as the second period began, while Swansea continued to rely on the bustling Bony for any realistic threat on Southampton's goal.Jose Fonte was then cautioned for a foul on Hernandez, but Swansea tamefully wasted the opportunity with still no sign of Boruc or Vorm being seriously troubled.Swansea were guilty of giving possession away far too easily in midfield and Lambert joined the action 30 minutes from time when he replaced Lallana to give Saints renewed attacking impetus.Nathan Dyer followed Lambert off the bench as Swansea's first substitute, taking over from De Guzman, and there was certainly more urgency about the home side as they looked to secure a third successive league win following victories over Villa and Newcastle.It was not to be, though, and Lambert came up trumps when it mattered as Southampton collected an away win