Taylor takes one game at a time 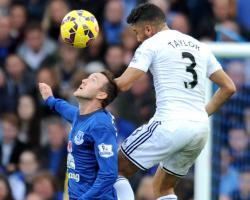 The Swans survived the second-half dismissal of Jonjo Shelvey to hang on for a goalless draw at Everton and further underline their presence at the top end of the Barclays Premier League.

Overall, Garry Monk's side lacked their usual fluency in a drab affair at Goodison Park but they moderated their ambition after Shelvey's red card 18 minutes from time to ensure they avoided defeat.

It said much for their defensive discipline under former centre-back Monk, who has attempted to add resilience to the free-flowing style that has become well established at the Liberty Stadium.

But any idea that the Swans can maintain the momentum and push for a place in Europe is something left-back Taylor is not ready to consider.

The Wales international said: "We are not thinking about anything like that

It's week by week.

"We have got a couple of massive games now against Arsenal and Manchester City and they are games where if we can get clean sheets it would be brilliant.

"But we are not getting ahead of ourselves

There are games this season we should have gone on to win and games like Saturday where we have nicked points away from home at good places.

Top six? I don't know, but we will keep striving to do well."

There were few chances at Goodison but Swansea had reason to feel aggrieved when Everton defender Antolin Alcaraz - who later went off with a serious shoulder injury - appeared to stretch out a hand to stop a Shelvey shot in the first half.

Shelvey protested but referee Kevin Friend gave nothing and the former Liverpool midfielder's frustration might have contributed to his needless first booking soon after.

Shelvey kicked the ball away after conceding a foul and that was something that he would later regret when he was sent off after 72 minutes for impeding James McCarthy.

Taylor, 25, said: "First half we were under the cosh and had to defend really well

We could have got a goal in that spell and were starting to think we could maybe win the game, but then the sending-off changed the game and you look then to get the point.

If you keep a clean sheet at Goodison you have got to be happy."

The Toffees did apply late pressure but were unable to make it count.

They might have snatched victory with what would have been the final touch of the game as Samuel Eto'o delivered a dangerous ball but Romelu Lukaku could not make contact in front of goal.

The main positive for Roberto Martinez's men was that the result at least extended their unbeaten Premier League run to three games.

It was a nothing game

There weren't many chances at either end.

"It was disappointing for us because we like to score lots of goals but we kept a clean sheet, which is a positive and a draw at home keeps us going.

"We are playing well

We are in the middle of a pretty good run

Of course we would have liked to have won but we have got two other big games this week and this keeps us ticking over, and keeps us unbeaten in a few games."

Everton host Lille in the Europa League on Thursday and travel to Sunderland next Sunday.