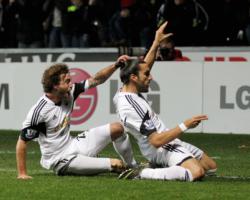 Michael Laudrup has warned his Swansea side they must be clinical in front of goal when they host Manchester City on New Year's Day.


The Swans host City on the back of a 1-1 draw at Aston Villa, where the Welsh club dominated but failed to make the most of their advantage.


It has been a familiar tale through the first half of Swansea's season; plenty of possession and quality build-up, but no end product.


And Laudrup knows a repeat could be very costly against a free-scoring City side.


"In their last eight games, they have won seven and drawn at Southampton.


"We played them a month ago and played very well in the first half. We didn't take our chances, and in the end they beat us 3-0 because they have so much quality.


"For some - even some of the bigger teams - it has been even worse (against City).


"But what makes this sport so unique is that, even when you look at their squad and see a player who has the same value as the whole of your team, you still have a chance.


"If we can play like we did last time, as well as take our chances, I really think we have a chance.


"But we have to take our chances when we get them, because you will not get seven clear goal chances against a team like City."


Swansea will start 2014 in 11th place in the Premier League table, having also safely negotiated the group stage of the Europa League.


But they are just five points above the relegation zone, and Laudrup knows there is still plenty of work to do to ensure Swansea remain in the top flight for a fourth-straight season.


Manchester City boss Manuel Pellegrini is happy with his side's position heading into the new year and the second half of the season.


City will end 2013 just a point off the top of the Barclays Premier League having clawed back five points on leaders Arsenal over the course of the last month.


Pellegrini had said he wanted to be top, or at least within three points of it, by January.


With that aim completed, and progress also made in the Champions League and Capital One Cup, he is now looking forward to a strong push over the remainder of the campaign.


The Chilean said: "I think it was a fantastic month for us.


"We played nine games in December, we won eight and drew just one.


"In the Premier League, from the last seven we won six.


"To recover six points in a month is not easy.


"We continue in Capital One and Champions League so I think the first six months of the year were very good for us. Now in the second half we try to win."


Despite their superb form, City have found the going tough in their past two games.


City did well to hang on for a 2-1 win as Liverpool made life difficult on Boxing Day and two days later they could only manage a 1-0 victory over battling Crystal Palace.


Pellegrini expects more of the same at the Liberty Stadium even though the Swans have not won in five Premier League games and City overcame the Welsh side 3-0 a month ago.


The 60-year-old said: "Every team in the Premier League can cause problems to our team and to all other teams. That is why it is so close, this Premier League.


"I repeat what I have said, six or seven teams will be fighting for the Premier League until the end.


"We will continue exactly the same as in the first half.


"Within four or five points, you have five teams and the second half will be exactly the same.


"Swansea play very well at home and away. We will need to be very strong in all senses, defending and attacking, if we want the three points."


Just six points separate Arsenal at the top from Tottenham in seventh.


Such is the tight nature of the table that Liverpool, who led on Christmas Day, have slipped to fifth in the space of two games.


It could be the closest title race for years, something Pellegrini had suspected might happen.


He said: "It is not a surprise for me. I have lived in Europe for the last 10 years, in Spain, and I always saw the Premier League so I knew there were strong teams."


Right-back Pablo Zabaleta, recently recovered from a hamstring injury, was rested against Palace but will return.


Goalkeeper Joe Hart will play despite needing five stitches in a wound under his left eye suffered in the Palace match.