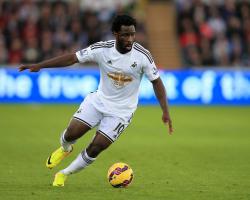 Swansea V Crystal Palace - view commentary, squad, and statistics of the game live.Monk hits back at Rodgers criticsGarry Monk has labelled criticism of his former manager and Liverpool boss Brendan Rodgers as "ridiculous" as he seeks the launchpad for Swansea to challenge for European qualification.Seventh-placed Swansea welcome Crystal Palace to the Liberty Stadium on Saturday and Monk believes nine games in the next six weeks will determine whether his side can maintain their fine start to the Barclays Premier League season and push for Europe.Swansea's impressive form has been in stark contrast to that of Liverpool, where Rodgers has come under intense scrutiny just six months after almost leading the Merseysiders to a first domestic title in 24 years.Monk was club captain at Swansea when Rodgers guided the Welsh club into the Premier League in 2011 and feels no-one is better qualified than the Northern Irishman to do the job at Anfield."Brendan's a great manager and he's done so well there," Monk said ahead of the Crystal Palace game."He nearly won the league last season and within six months people are questioning his ability to manage Liverpool, which is just ridiculous."But this is the way of the world

Unfortunately, in this profession at this level, it's a hunt."People would rather see that than people doing well because it's better news but, in terms of Brendan, I can't think of a person who'd do a better job at that place."He's had a high turnover of players and they're not firing on all cylinders, but these big teams don't dwell for long."Liverpool will pick up and you'll see them rise up towards the top of the league come the end of the season."Swansea played in the Europa League last season after winning the Capital One Cup and Monk has said it is not impossible the club could qualify for Europe again through their league position.But he admits if that is to happen then Swansea must come through a congested period in good shape, with nine league matches between the Palace game and the visit of West Ham on January 10."Because of the start we've had, the points tally we are on, it's an opportunity for us to try and get ahead of what we would have been on before," Monk said."We'd love to get into the Europa League, but that's not my focus now."It's not a target but you try to get to 40 points as soon as you can and, coming out of that period of nine games, if we can have a realistic chance of being somewhere near to that then maybe you can look at other things."But until that period comes I cannot worry about anything else other than the three points."Swansea's situation could even be a lot healthier as they have lost 11 points from leading positions in games and Monk admits that has been annoying.But he insists that losing leads has not affected his players as they prepare for home games against Palace and QPR in the space of four days which they will be expected to win."We could have done better and it is a source of frustration," Monk said."But then I see those games and the situations within them were out of our hands or were against teams who were very powerful, and we did not quite have enough to hold them off."Obviously, we do not want to be taking the lead and not winning, but we are getting better at it and the Newcastle game was the only one that felt like a loss because of the amount of control we had."It (losing leads) can get in players' mind but definitely not at the moment."I'm very mindful as a manager that we've slipped up in these type of games before, I have played in teams where we have done that and I understand that."Palace will come here and make it very difficult, very scrappy, slow it down and be very physical with us."But that's something we will have to overcome and what we have been talking about this week."Swansea are again without Argentina central defender Federico Fernandez (calf).But other than that Monk has a fully-fit squad to select from, with Wayne Routledge having returned to training following a groin injury.Monk has to decide whether to recall England international Jonjo Shelvey, who failed to reclaim his starting spot after suspension last week

I always liked him as a player

He's fitted in like a glove."If anything I think he's taken them on

He's lifted them and they're on a higher planet."Swansea are probably the best team I've seen this year

I know it was only 2-1, but I thought they dominated Arsenal for long periods and down the spine they're as good as anyone in the division, with (Ashley) Williams, (Gylfi) Sigurdsson and (Wilfried) Bony

It'll be a good test for us now on Saturday."Warnock has told Monk, who climbed the divisions with Swansea as a player, to enjoy the good times as there are plenty of bad times in management."I look at him and you can see he's enjoying it," Warnock added."He's got the respect of people like Ashley Williams, who he played with, the fans and the board."I'd imagine there's no better place

When you're enjoying a good period like Garry is, you've got to enjoy every minute of it."Warnock has enjoyed this week more than others in recent weeks after the 3-1 defeat of Liverpool.Palace had lost four of five league games prior to their first win since a 2-0 triumph at home to Leicester on September 27.Warnock praised his forwards for the display and called on the likes of Marouane Chamakh to deliver more consistently."The front four know I had been disappointed in them for three games before the Liverpool game," Warnock added."I asked them if they could perform again for us

Liverpool is exactly how I know they can play."When Chamakh plays well, we play well

Even Match of the Day were surprised how much ground Chamakh covered."It doesn't surprise anybody here, because he's an unsung hero, but he's got to play like that week-in, week-out."He can't just pick that one every four games

Hopefully he can find that level of consistency now and it will give us more of a chance to keep getting good results."Dwight Gayle was on target against Liverpool and must also kick on.Warnock added: "He is the best finisher in the club, but he showed at the weekend that he's got another dimension to give."That's got to be the minimum requirement for a striker, to work your socks off, no matter how good you are."To see him chasing centre-halves down in the 92nd minute was fantastic."Defenders Damien Delaney and Adrian Mariappa are out of the trip.Delaney suffered a calf strain in that Liverpool win while Mariappa missed out with a knee injury which will keep him out for a couple of weeks