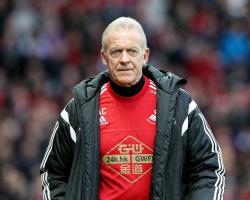 Curtis has been in caretaker charge since Swansea sacked Garry Monk on December 9 after a run of only one win in 12 games.

Under Curtis' command, Swansea have won one, drawn two and lost two of their five games and are currently two points above the Barclays Premier League relegation zone.

Announcing the appointment on the club's official website, chairman Huw Jenkins said: "Alan Curtis and the current staff set-up will continue until the end of the season

We firmly believe it is the right decision for Swansea City."