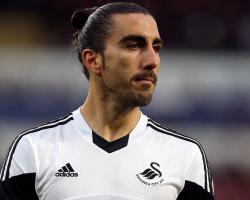 The pair clashed as the Swans prepared for Sunday's 3-1 home defeat against Tottenham, which extended their winless run to eight games and left them three points above the relegation zone.

Reports have claimed Flores was seen brandishing a brick during the incident, but this was denied outright by the club.

A Swansea spokesman said: "Chico Flores and Garry Monk had an exchange of words, which is not uncommon between players in training grounds across the country, but no threats or altercations took place between the players in question.

"It's understood a member of the public phoned the police, who felt no action was required.

"The club can categorically state that nobody was threatened with a brick.

"The matter has been dealt with and is concluded."

A statement from South Wales Police said: "Police were called to the training ground at around 1.30pm on Friday.

"Club officials were spoken to and no police action was required."

Former captain Monk has not played since September after suffering a knee injury, while Flores, who joined from Genoa in the summer of 2012, has struggled for his best form in recent months.