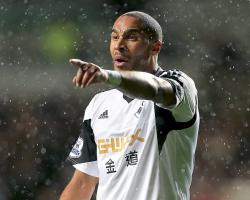 Williams and Swansea will have the rare experience of visiting Manchester United in back-to-back games, with a Premier League away fixture following on from Sunday's FA Cup third-round tie.

Under new boss David Moyes, United's previously impregnable fortress has already been breached by visiting sides on four occasions so far this season.

But Williams does not believe a trip to the Premier League champions has got any easier as Swansea look to end a run of seven games without a win in all competitions.

"It's an important game as we haven't won in so long, but going to Old Trafford is a special occasion for any footballer and we will go there," said the Wales defender.

"I think they are a top class side, there are no worries about United as far as I am concerned.

"With the transition with the new manager things can take time and it was going to be tough. But they still have a lot of the same players from last season and they can play a number of their players in their squad who are world class."

United stopper David De Gea is confident they will succeed at Old Trafford.

"The FA Cup is a competition with a lot of history,'' he said.

"There is a lot of romance associated with it and it would be terrific to win it.

"Being at home is a boost because we will have so many fans behind us.

"Still, Swansea are a tough side and it will be a complicated game for us.''