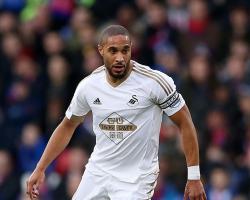 The Italian was in the stands for last Monday's win over Watford but was far more animated in the technical area as the Swans beat Everton 2-1 to secure back-to-back league victories for the first time this season.

Guidolin, a former Udinese manager, speaks in broken English and has an interpreter to help him get his message across in the training ground but when that fails Williams said old-fashioned expressive hand gestures seem to do the trick.

"It has probably been about a new guy coming in; everyone gets buzzing again looking to impress," the Wales international told Press Association Sport.

"A new manager comes in and a lot of people liven up trying to impress him, that is only human nature.

"The players who want to get into the team want to show him what they can do.

"He has lifted the place a little bit and also tried to implement some of his own ideas into the team in the week he has taken training.

"We know what he is asking of and we are trying to help him settle in as quickly as possible.

"I think all the lads have been impressed with his first week and how he goes about work and what he is asking of us so it looks good at the moment.

"He is lively on the training pitch and he is trying to speak as much English as he can but it is not much of a problem as he has a translator.

"Most of the time you know exactly what he is trying to say by his actions!

"We understand what he is saying and I've been really impressed with him."

Six points in a week has helped Swansea move four points clear of the relegation zone.

While that has lifted some of the growing pressure in south Wales Williams insists the job is far from done and the Swans have to maintain their momentum in order to safeguard their top-flight future.

"It is about building on results and performances and we have done that," he added.

"We want to put a run together and pick up as many points as we can to put some distance between us and the drop zone.

"When you play on a Sunday or a Monday and you drop back into the [relegation] zone it is not nice to see.

"We understand it is only two wins and we have a lot of work to do.

"We don't want to relax now as we have a big month now and we want to push on.

"The main thing is we build on it

We won against West Brom and Villa and didn't build on it.

"We can move up the league by putting together wins or wins and draws.

"Every team has a little run, whether it is a good one or a bad one, so we are looking to make it our turn now."