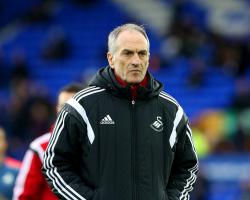 The Italian was in the stands for Monday's victory over Watford but played his part to the full on the touchline in the 2-1 win over Everton at Goodison Park, registering the club's first back-to-back wins of the season.

Swansea are now four points clear of the bottom three and Guidolin is looking upwards.

"Six points in two matches is very important for us because the table was not good," he said.

"Now it is not very good

I hope to have the possibility to go up in the table.

"In this moment I am very happy

This is the first match in Premier League for me.

"I dreamed of working in Premier League but I didn't dream of winning the first match.

Gylfi Sigurdsson's penalty was cancelled out by Jack Cork's own goal after he diverted in Gareth Barry's backheel before Andre Ayew's deflected shot restored a lead the Swans comfortably held onto.

Everton manager Roberto Martinez was critical of his players for the way they handed the initiative to their opponents, although the loss to injury of Muhamed Besic and Kevin Mirallas - ruling both out of Wednesday's crucial Capital One Cup semi-final second leg at Manchester City - inside the first half-hour disrupted their plans.

"We were very slow in our performance - pedestrian - but two aspects affected our momentum which was the two injuries," he said.

"The first half and second half performance were very contrasting.

"We created enough chances to win the game

The fearful aspect of our performance was a real shame."

The Toffees now have the worst home defensive record in the Premier League.

"We haven't found the right way of playing at home

That is the truth," added Martinez.

"The stats reflect a really poor defensive record at home.

"We want to impress our fans, play attacking football and become a winning team but we are finding it tough to free ourselves."

England centre-back John Stones was at fault for Swansea's first goal, leaving a backpass short, and had a poor game generally but Martinez defended the 21-year-old.

"John is a young man who has a lot of pride in what he does," he said.

"What has happened with John and a few of our youngsters is they have been in the limelight and we forget they are young and need to be given space and time."