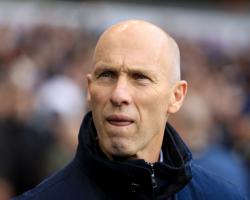 More misery for Bob Bradley as Swansea beaten at Middlesbrough

Alvaro Negredo heaped more pressure on Swansea boss Bob Bradley with two first-half goals as Middlesbrough coasted to a 3-0 win over their relegation rivals at the Riverside Stadium.

Negredo's early brace and a 58th minute effort from Marten de Roon sunk the below-par Swans and suggested it will take a Christmas miracle to lift them out of the increasingly precarious position in the Premier League's bottom three.

Bradley's men were second best throughout, giving Negredo space in the box to swing home an 18th minute opener before Jordi Amat tripped Adam Forshaw to set up Negredo's second from the spot.

Bustling Boro got the third they deserved just before the hour mark when Marten de Roon converted a cross from Negredo and they could have made it four late on when the returning George Friend roved forward only to fire high and wide.

Bradley's men had looked lively in the opening moments, Modou Barrow having a cross cut out by Ben Gibson then Gylfi Sigurdsson stinging the hands of Boro keeper Victor Valdes from long-range.

But the hosts soon settled and Negredo had his first chance in the 10th minute when his shot across the face of goal was well deflected by Swans goalkeeper Lukasz Fabianski with Adam Forshaw lurking.

The early departure of Viktor Fischer with an apparent knee problem did nothing to quell Boro's momentum, and Negredo grabbed his fine opener on 18 minutes when he finished off a swift counter-attack by swinging home from Adam Clayton's cross.

The returning Ramirez almost made it two in the 23rd minute when he fired a free-kick inches over the bar after being fouled by Angel Rangel in a dangerous central position.

Boro increased their lead just before the half-hour when Jordi Amat, who had arguably been responsible for losing Negredo for the opener, clipped Forshaw in the box leading referee Neil Swarbrick to point to the spot.

Negredo made no mistake, deceiving Fabianski and placing a low shot to the keeper's left to ensure the home side ended the first period well in command.

For all their urgency, Swansea were still far too wayward with their attacking intent in the opening minutes of the second half, and Downing had the best chance for Boro when he drilled a long-ranger straight at Fabianski.

Taking advantage of alarming gaps in the Swansea rearguard, Boro increased their lead in the 58th minute with the simplest of goals, Ramirez crossing from the right for the unmarked de Roon to knock home from close range.

Despite their chance having surely gone, Swansea belatedly pressed with Sigurdsson firing over the bar and a strong effort from substitute Leroy Fer blocked in a crowded box.

Friend missed the target after Fabio launched a swift counter-attack while Swansea's hopes of a consolation were dashed when Valdes saved well from Fernando Llorente late on.