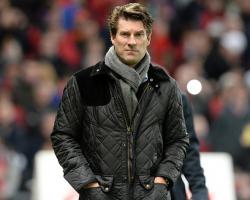 Swansea head to face the Premier League champions just six days after dumping them out in the third-round of the FA Cup thanks to Wilfried Bony's late goal.

United's subsequent defeat to Sunderland in the first leg of their Capital One Cup semi-final condemned the Red Devils to three losses in a row for the first time since 2001.

If Swansea were to secure a repeat success at a ground where they had never won prior to Sunday, it would mean four defeats in a row for United for the first time since October and November 1961.

But Laudrup knows the Swans will face a United team with a point to prove this weekend.

"Can we win again? I don't know, but it is possible," said the Dane.

"I think it will be more difficult than last week. They lost in the League Cup as well and I expect the United team to come out and really go at us.

"They have to win this game so we have to be ready. It will be a tough game again. They won't like what they hear about losing three in a row.

"But If they win a game, they are back. Football can change in a matter of weeks. They want to show that they are better than the things that have been said and written.

"We have shown that it is possible to win there if you believe in it. We played with a lot of confidence, but needed a win.

"Sometimes that win comes when you least expect it. You wouldn't maybe expect to win at Old Trafford and we did."

United are hoping to be able to call on at least one of Wayne Rooney and Robin van Persie on Saturday, and Laudrup acknowledged their return could make a huge difference.

"If he is back it gives something to the team, not only technically and tactically, but also to his team-mates. That is important. The same goes for Robin van Persie, if he is back."

Swansea's hopes of success will not be helped by an extensive injury list.

Laudrup will be without Michel Vorm, Michu, Dwight Tiendalli, Jonathan de Guzman, Pablo Hernandez and Roland Lamah for the second trip to Old Trafford in a week.

The number of casualties means Laudrup is likely to dip into the January transfer market for a forward with Liverpool's Iago Aspas and Blackpool's Tom Ince being linked with a move to the Liberty Stadium.

There had been reports a deal for Ince was close, with a fee of around Â£4million being touted, but Laudrup was cagey when asked about the England Under-21 man making the move to south Wales.

"I think I can't really say so much about that," he said. "He is a talent, he has played for England Under-21s. It is a long way to go. One thing is playing in the Championship, another is the Premier League. I think there is a lot of talk and rumours and speculation so let's leave it there."

He told talkSPORT: "Looking at young British players, Tom is one of them and he performs well with the England Under-21s.

"At our club, at our level, we always look for young players we can possibly add to the squad but whether we get any further with Tom Ince or other players remains to be seen.

"At the moment it is pure speculation, but young players are always great to bring in, to see their careers develop, and we feel our club is right for that."