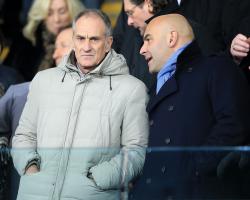 The Italian was appointed as the Swans' new head coach on Monday and watched his new team defeat Watford that evening.

He will take charge of a match for the first time against Everton on Sunday.

Guidolin left his last managerial post with Udinese in May 2014 and took up a position as technical supervisor of the three teams owned by the Pozzo family - Udinese, Granada and Watford.

He told La Gazzetta dello Sport: " I think I did some great work at Udinese. I let them know I would have liked to work at Watford, even in the Championship, but other managers were hired.

"Given their results, which include promotion and their good form in the Premier League, they made the right decision."

Guidolin said he had received offers to manage again in Italy but held out for a chance abroad.

"I preferred to wait as I wanted to experience something outside of Italy, and in the end I was rewarded," he said.

"I knew it wouldn't be easy as I'm not well-known internationally, but my agent Frank Trimboli did a great job in getting me this opportunity with Swansea."

Guidolin has been monitoring Swansea and is positive about the squad he has to work with despite their position just above the relegation zone.

The 60-year-old has appointed former Chelsea midfielder Gabriele Ambrosetti as his assistant and will also work alongside Alan Curtis, who had been interim manager since Garry Monk's departure last month.

Guidolin said: "The initial signs are encouraging. I was impressed by how cordial everyone was.

"The first half against Watford was our best performance in some time. I have been following Swansea for the past month and I am convinced we have a great base to work from.

"I will try to implement my work on things that make a big difference like focus, concentration and intensity while trying to get them to play good football."

Guidolin cited the stress of the job when he left his post at Udinese, and he added: "It is my strength, and my weakness. Stress can help you, but it can also hurt you.

"When your job occupies your entire day, the results eventually come and that is the secret to my career. However, at the same time, the struggle drains you."