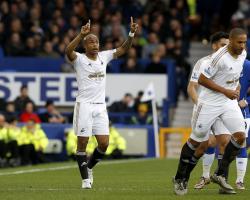 The Italian watched Monday's win over Watford from the stands and it is a matter for debate how much he influenced this result - the Swans' first ever league triumph in the 22 meetings between the two - as the visitors did not have to play particularly well to beat the worst home defence in the league.

Roberto Martinez's side have now conceded 22 goals in 12 home games, three more than anyone else, and the ease with which a Swansea team which had not scored in the first half in their previous eight away league matches was a concern.

A sluggish Everton never got going and gifted Swansea an the opener when John Stones' woeful backpass led to Gylfi Sigurdsson's penalty.

A Jack Cork own goal, denying Gareth Barry his first strike for 88 matches, was quickly followed by Andre Ayew's strike - and that was to prove decisive.

With captain Phil Jagielka rested ahead of Wednesday's Capital One Cup semi-final second leg, Stones was the senior centre-back - but he had a match to forget as his tendency to overplay proved costly.

That contrasted sharply with his opposite number Ashley Williams, whose old-fashioned approach saw him take no chances - or prisoners - and keep in-form Toffees striker Romelu Lukaku relatively quiet.

Everton's afternoon began badly when they lost Muhamed Besic, who had hit the post with the first shot of the match, to injury after just 10 minutes.

But that was only the start as in the 18th minute Stones delayed too long before leaving a square backpass short, which meant Tim Howard's attempted clearance only hacked down Ayew and Sigurdsson hammered home the penalty.

Such is the regard Howard is currently held in by many supporters at least one Everton fan called for his own goalkeeper to be sent off for the foul but however slow the American's reactions were Stones had to take his fair share of the blame.

However, the hosts fashioned a well-taken 27th-minute equaliser when Gerard Deulofeu's corner was backheeled by Barry via Jack Cork and in off the far post.

The celebrations were short-lived as injury to Kevin Mirallas forced a second substitution before Swansea went ahead again.

Deulofeu thought he should have had a handball decision against Williams but the visitors countered with Neil Taylor going past makeshift right-back Bryan Oviedo to set up Ayew, whose shot deflected off Stones past Howard.

After the break Deulofeu finally got into the game with a series of viciously whipped-in crosses but Lukaku, in particular, could not take advantage.

Guidolin, adopting a very Italian approach, was taking no chances and sent on defender Jordi Amat for winger Wayne Routledge and Eder for Ayew to shore things up.

Substitute Seamus Coleman rolled a late shot wide and then volleyed over from four yards with the last kick of the game but Everton hardly put Lukasz Fabianski under huge pressure as they chased the game.

The result lifted Swansea four points clear of the relegation zone and only four points behind Everton, in 12th.

"The Everton fans have got their young players in a nervous state here!! Looks like they wont allow em time to make mistakes & learn...."

MOMENT OF THE MATCH

Substitute Seamus Coleman missing an open goal from four yards with the last kick of the match which would have snatched the point Everton should at least have had.

VIEW FROM THE BENCH

Francesco Guidolin, often squatting down in technical area, may have had a game plan but even he could not have accounted for being gifted the opener

Roberto Martinez was hamstrung by two early injuries and he cannot be blamed for a player missing an open goal from four yards but a lack of intensity suggests something was wrong from the start.

MOAN OF THE MATCH