Fabianski has nothing to prove 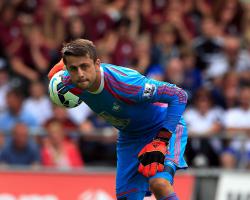 But the Swansea goalkeeper knows enough about Wenger's burning will to win after seven seasons at Arsenal to have warned his team-mates to expect a backlash after the Gunners' Champions League collapse against Anderlecht in midweek.

Asked how Gunners boss Wenger would react to Arsenal throwing away a three-goal lead at home to draw 3-3 against the Belgian champions, Fabianski replied: "I don't know."

The Pole then broke into a big smile, saying: "Maybe I do

He won't be happy.

"They have a good team, strong squad and very good offensive players and I'm sure the game on Sunday will be an opportunity to bounce back from the Anderlecht result.

"It will make them motivated for our game."

Fabianski joined Arsenal from Polish club Legia Warsaw in 2007 but he made only 31 league starts for the Gunners before heading to south Wales in the summer.

The 29-year-old Poland international said Wenger wanted him to extend his Arsenal career but his mind was made up even before he played his part in the club's first trophy success for nine years, the FA Cup final victory over Hull.

"I don't have to prove anything to Arsenal or the manager," Fabianski said.

"It was my decision to leave the club and I finished in a good way so we've all got massive respect towards each other.

"When I was coming to the end of my contract there were more intense conversations more often between me and the manager.

"But I had decided to leave and he really respected my decision."

Meanwhile, Arsenal will welcome midfielder Jack Wilshere back from illness

The England midfielder sat out the win against Burnley and Tuesday night's Champions League draw with Anderlecht but Wenger has confirmed he is now fit to return.

Mikel Arteta has been ruled out after picking up a hamstring injury against the Belgians but Wenger insisted Theo Walcott is fit enough to start if he is selected following his first appearance since January as a substitute last weekend.

Wenger has warned Arsenal and England fans that they will have to wait until the new year to see the best of Walcott.

The 25-year-old is in line to make his first start since suffering a cruciate knee ligament injury on January 4 when the Gunners travel to Swansea.

Walcott made his comeback from the bench in last weekend's win over Burnley and has been included in Roy Hodgson's England squad for the European Championship qualifier against Slovenia and the friendly in Scotland.

Although Wenger said he was pleased that Walcott was linking up with the national team in the hope of him getting more competitive minutes, the Arsenal boss believes the former Southampton youngster is still some way from being back to his peak.

"It takes two months," he said when asked how long it will take Walcott to get back to his best.

"Once you're back in full training, you count two months

Of course, people think you're back and you play but it's not like that

Ten months is a long time in top-level football.

"(You lose) the sharpness, the speed

At the top level, it's a fraction of a second that makes the decisions

And to find the confidence to get away from people.

"You're nearly there but you're not there and for a while you think, 'will that ever come back?' And suddenly yes, it's there again

But it takes time to get that fraction of pace.

He will go with England and get what he needs to

He will get competitive training every day and get back into games.

"At the moment we go from recovery to recovery

He works hard, but maybe he can play against Scotland and gain a lot from that."