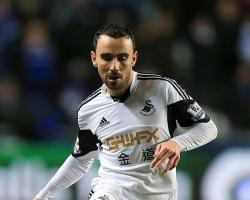 Britton, 32, has not played so far this season after suffering a knee injury during the summer.

However, the Swans announced on their official website that he took part in training on Tuesday and will continue with partial team training for the rest of this week before making a full return during the forthcoming international break.

If everything goes according to plan, Britton could then be available for Swansea's trip to The Etihad on November 22.

Swansea have also said that defenders Jordi Amat and Dwight Tiendalli are back in full training following knee and groin injuries, respectively.

Amat has not featured since being hurt during a 4-2 league defeat at Chelsea in September, while Tiendalli's last appearance came against Capital One Cup opponents Rotherham the previous month