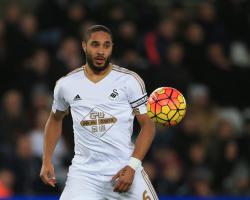 Guidolin had a watching brief on Monday night as Swansea moved out of the Barclays Premier League relegation zone by beating Watford 1-0, Williams' first goal for nearly two years securing the Welsh club only their third win in 18 attempts.

The former Udinese boss, who takes over team matters from interim manager Alan Curtis, will take the reins for Sunday's visit to Everton - but Williams insists the players are not bothered who is in charge.

"I know everything about him (Guidolin) now as I Googled him on Sunday night," Williams said.

"I'm sure everybody did the same thing as I did and the boys did, we know his background but it doesn't really matter to us who comes in.

"We get told 'he's your manager', you listen to what he has to say, give your all and do as best as you possibly can.

"We have to help him settle in as quick as possible

The chairman (Huw Jenkins) has made that move which is fine with us.

"We just get on with it and we're just happy we got the win for Curt and the other guys."

Williams said the players were aware of Guidolin's presence at the Liberty Stadium, the 60-year-old having flown in from Italy on Monday afternoon.

It was far from a vintage performance from the Swans but there was no shortage of commitment and endeavour to please Guidolin, as Curtis closed his seven-game reign with a second victory.

"As players we knew he was watching and when you've got a new manager you want to impress him," Williams said.

"But more than that it was about doing it for each other and the club.

"We understand the position we are in and it's not the time to be going through the motions or messing around.

"It's just about getting out of this position more than impressing the manager, we just need to pick up points.

"We're professionals and we just go out and do our job for the club that pays us, regardless of who is the manager."

Watford's defeat was their fourth league loss in a row and the Hornets have now gone five games without a win.

It is a run which has seen them fall to 12th and the 19-goal partnership of Odion Ighalo and Troy Deeney have drawn a blank in the last three league games.

But Watford boss Quique Sanchez Flores has sought to improve the supply line to them by completing the signing of Malaga winger Nordin Amrabat on a three-and-a-half-year contract.

"He is good and it is good for us to have players to cover different positions," said Flores, who refused to discuss reports linking them to young Liverpool striker Jerome Sinclair.

"To have competition is very important and it is good news that very good players want to come to Watford.

"It means that we are growing and we can accept that players want to come here and play for us.

"Amrabat is ready to play, he knows Watford and the possibility that we have in the Premier League.

"He needs to know my rules and how we are working, but great players are very quick to learn the systems."