Alan Curtis would be willing to step aside at Swansea 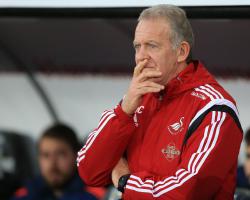 Curtis succeeded the sacked Garry Monk in a caretaker capacity last month and his appointment until the end of the season was only confirmed on January 7.

But it was reported on Sunday that Curtis' position may already be under threat with Swansea dropping into the relegation zone ahead of Monday night's home game with Watford.

Press Association Sport understands there is no desire to change the manager again at this moment after an exhaustive search failed to find the right candidate following Monk's departure.

But Curtis, who has spent over 40 years at Swansea as player, coach and manager, accepts the club's future is more important than that of any one individual.

"I'd expect to be here until the end of the season, but if results go against us and the club deem it that they need to bring someone in at short notice, then so be it," said Curtis.

"I've got no sort of vanity (that I must) be here until the end of the season.

"We've worked hard to get into the Premier League.

"It's important we stay here, not just for next season but for seasons to come as well."

Newcastle's 2-1 win over West Ham on Saturday sent Swansea back into the bottom three and increased the pressure on them ahead of Watford's visit.

Performances have generally improved under Curtis' command but he has only won of his six league games - the Boxing Day victory over West Brom - and Swansea are now in a dogfight to secure Premier League football for a sixth season.

"I can't contemplate it (relegation)

We have to find a way," Curtis said.

"If you analyse the six games the performances have been good, and the win over West Brom was the least impressive.

"From those games we could have had an extra six or seven points at least, which would have given us a huge lift, and we'd be far more relaxed about our prospects for the rest of the season.

"But where we are now we need a change of fortune and the only way you can do that is keep believing in what you're doing.

"The players certainly still have that belief.

"I've always said our style will be the thing that will save us or take us down, but I don't want to think about that."

Curtis had seemed reluctant to step into Monk's shoes at first, but said he could never have left Swansea in the lurch.

"I could never ever turn the job down when the club decided that they weren't going to bring anybody in and wanted to keep it in-house," Curtis said.

"I could have turned around and said 'it's not for me, find somebody else'.

"It's a huge responsibility

But if they felt I was the right person I could never have turned it down."