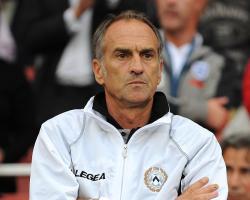 The Italian, who will work alongside Alan Curtis at the Liberty Stadium, has an interesting CV.

1 He knows a thing or two about Swansea's next opponents

When Guidolin called time on his four-season stint as Udinese boss in May 2014, he kept working with the club's owners, the Pozzo family.

His brief was to supervise the three teams under the Pozzos' control - namely Udinese, Granada, and Watford.

And when Slavisa Jokanovic left Vicarage Road in the summer, Guidolin was almost asked to step in before the position ultimately went to Quique Sanchez Flores

2 He could have moved to England nine years ago

"I would be pleased to have a professional adventure in England." In October 2007 an out-of-work Guidolin thanked QPR for their interest in him but turned down the chance to replace John Gregory.

The Loftus Road job went instead to Luigi De Canio - with then-owner Flavio Briatore determined to bring some Italian flair to the Shepherd's Bush outfit, who were then struggling in the Championship.

3 He failed to win big in Monte Carlo

He signed a two-year deal with ambitious Monaco in 2005 but left the principality after a poor 10th-placed finish in his first season.

The Venetian was soon back at Palermo, the club he had previously restored to Serie A after a 35-year absence

Under his stewardship, the Sicilians finished fifth in 2007 to reach the UEFA Cup.

4 He is a promotion expert

This may be a bitter pill to swallow for Swans fans but it could well taste a lot sweeter in a year's time.

His unfancied Vicenza side climbed out of Serie B to win the Coppa Italia and qualify for Europe in the late 1990s.

He got the best out of Luca Toni as the striker hit 30 goals to fire Palermo into the top flight and when Parma suffered a shock relegation in 2008, Guidolin helped them bounce back immediately.

5 He turned Alexis Sanchez into the player he is today

Guidolin cannot claim to have recruited Sanchez himself - the Chilean arrived at the Stadio Friuli two years before him, in 2008 - but he certainly got the best out of the man from Tocopilla.

Sanchez was key to Udinese's fourth and third-placed finishes in Serie A, which brought about entry to the Champions League's qualifying rounds

The likes of Jefferson Montero and Andre Ayew - or even Marvin Emnes - could surely benefit from an arm around the shoulder from the knowledgeable Italian.